Blog | Bound Together: Fate Brought Diane and Her Owner Together 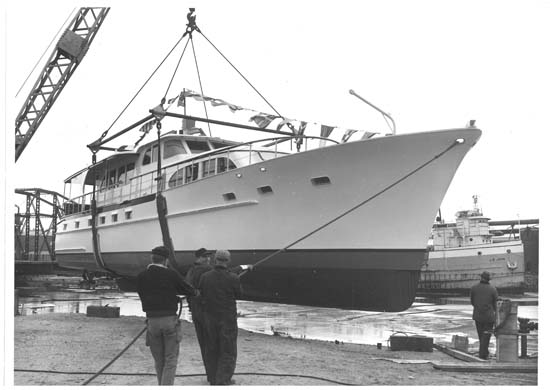 Bound Together: Fate Brought Diane and Her Owner Together

Buying a used boat means buying all of her history as well, and refitting a boat means confronting that history head-on. Rare is the  owner who fortunate enough to find a vessel with a history that entwines with his own.

When Bob Meierhoff first saw the 75-foot Burger yacht, she was named Lazy Girl and laid up on the hard at River Bend in Fort Lauderdale. It was 1992, and Meierhoff was in the market for a new yacht to refit. He’d just finished refurbishing a wooden hull vessel, which he would end up selling three years later.

“My business is steel, and I felt I understood what it took to work on a steel hull,” he remembers.

The first and most important change he made was renaming the yacht Diane, after his wife. Before beginning construction, Meierhoff contacted Burger for the original drawings. After receiving the plans, Meierhoff began to notice odd coincidences in his life that connected him to the boat.

Those drawings, dated May and June of 1958, were signed by Jack Hargrave and were one of his first — if not the first — boat he designed while at Rybovich.

Back in Minnesota, Meierhoff’s father ran a marina in Duluth. Jack Hargrave’s extended family was around while Meierhoff grew up, and his Jack’s father even brought Manana over to Minnesota for the family.

In 1958, Burger launched the 75-footer with the moniker Ceriel for Waldo Tyler, of Cleveland. There was ice on Lake Michigan the day she first splashed. Tyler would eventually build another Hargrave-Burger yacht, adding six feet to better fit his needs.

At that time, Meierhoff was a student at Shattuck Boys Military School in Faribault, Minn, outside Minneapolis. One of his classmates was Skip Gunnell, whose mother, Margaret, was a Burger and whose father ran the yard.

“It was just more connections to that damn boat,” Meierhoff says.

After the launch, the yacht headed to Florida, where she’s remained ever since. Meierhoff rarely takes her out for long cruises but made an exception two years ago.

In 2011, Burger sponsored a vintage weekend at the Ocean Reef Club. Meierhoff found out Margaret DeMille, mother of his former classmate, was living in the community. She came down to see the yacht, which had just won Best Restoration Award.

Every year Meierhoff goes down to Ft. Lauderdale if there is a hurricane approaching. He’s ridden out six hurricanes aboard the steel hulled vessel. Diane is docked in relatively protected waters five miles inland from the Intercoastal Waterways, but when Hurricane Wilma came through in 2005, the dock had broken loose in the surge and Meierhoff had to run the engines to keep everything in place.

“She’s a strong boat, and everything works real well,” he casually says.

Despite Meierhoff’s personal history being woven together with the Burger’s, he says its time to downsize to something he can run more easily on his own.

“It’s a bit big for two people,” he says. “I’d also like something else to work on.”

Working off the original drawings, Meierhoff kept the exterior lines while tweaking the interior layout. The saloon and wheelhouse are relatively the same, with just the addition of modern electronics. Most of the modifications were to make it more appealing to the owner-operator. He converted the aft crew quarters into a third stateroom for more room for guests, and the galley and dining area were merged into one space to keep the cook with the guests.

In the engine room, the original main GM 610 diesel engines remain while the generators and other ancillary equipment have been upgraded.

“They are simple and in good shape,” Meierhoff says. “I worked on similar engines growing up. There are no electronics.”

Meierhoff’s next big challenge will be finding another vessel with a history as rife with coincidences as Diane—or at least one that needs enough work to keep him busy.