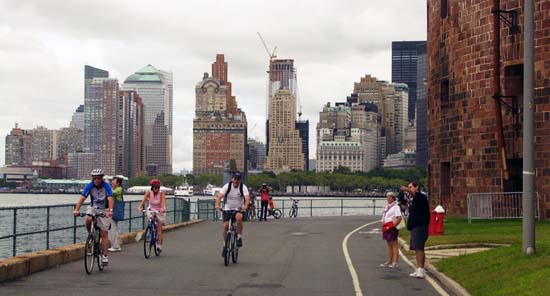 Note: Have you cruised to a new destination or seen a familiar destination from a new perspective? Leave a note in the comments and we will share your cruising tale.

Cruising north to New York City past Staten Island and the Statue of Liberty, the skyscrapers of the Financial District dominate the skyline. Amid the canyons of steel and glass are more restaurants, bars, and shops than a resident could explore in a lifetime, let alone a visitor with a departure date in mind. Beyond the hustle and bustle of Time Square and the high-end shopping of Fifth Avenue, there is another way to see the city: a series of small towns that just happen to be nestled blocks — rather than miles — apart. Chinatown’s dumpling shops are next to Little Italy’s pastry shops, which are next to galleries selling local artists and restaurants serving everything from international cuisine to food grown on the rooftops of the city.

There is a locavore movement flourishing in New York City. In addition to the numerous farmers’ markets bringing vegetables to the city, there are also vegetables being grown in the city. Although it can be difficult to imagine farmland in the city, Brooklyn Grange has converted the rooftops of warehouses in Queens and Brooklyn into a farm that produces 40,000 pounds of organic produce a year. May through October, visitors can stop by the Queens location on Saturdays to pick up farm-fresh produce or eat the prepared foods at restaurants such as Marlow and Sons.

For flavors a bit more far flung, choose a country and then match it to New York’s corresponding neighborhood. From Koreatown in Midtown for kimchee or venturing downtown into Chinatown for Tasty Hand-Pulled Noodles (tastyhandpullednoodles.com) in Manhattan or out into Brooklyn’s Greenpoint neighborhood for Polish specialties. For advanced-level dining, take the 7 train to Flushing, Queens, for the “other” Chinatown or head out to Brighton Beach for authentic Russian tea houses just down the beach from Coney Island.

A New Yorker’s favorite summertime activity is to find a local outdoor beer garden or patio and share a pint shoulder to shoulder with their friends. When that drink has been brewed or distilled in the city, it tastes just a little bit better. The Brooklyn Navy Yards in the DUMBO neighborhood are being converted from the abandoned commercial yards into space for artists and is home to the city’s oldest distillery and the first since Prohibition, Kings County Distillery [Above]. Farther up the East River, the Brooklyn Brewery in Williamsburg, Brooklyn, opens its doors on weekends to visitors to try all its offerings on tap or take a free tour of the brewery.

Nearby on the Williamsburg waterfront, the Brooklyn Flea and its Saturday food market Smorgsburg run weekend artists markets where local artists can sell their jewelry and small food vendors such as Dough can offer a taste of wares. Other venues such as the Young Artists’ Market in Manhattan and By Brooklyn also focus on goods produced within the five boroughs.

With the boat docked, the itch to get back on the water might need to be scratched. If so, take advantage of New York’s growing ferry services. The East River Ferry connects the coastal neighborhoods and provides a from-the-water view of the reclaiming of former factories such as the Domino sugar plant into parks and housing. The Staten Island Ferry attracts tourists with its free water view of the Statue of Liberty, and the neighboring ferry dock will whisk passengers to Governor’s Island to explore former U.S. Army base by foot or bicycle.

Although the weaving paths of Central Park and the endless galleries of the Metropolitan Museum of Art will always have their place on any visitor’s to-see list, stepping into one of the city’s smaller neighborhoods reshapes New York from an impenetrable maze of steel and concrete into cozy small towns and neighborhoods. A visit to New York quickly becomes a globe-hopping adventure with the best locally grown vegetables where you can trace the food from farm to plate.

Although Hurricane Sandy had a dramatic impact on New York’s coastline and the communities of Far Rockaway along the Atlantic coast are struggling to recover, many of the city’s marinas have sustained or resumed operations over the last few months. When choosing a marina, look for proximity to public transit stops. New York City has an extensive and reliable subway system that can get you to any of the city’s major sites – but only if you can get to the subway. There are additional marinas farther out on Long Island and north along the Hudson River, which will require a taxi and the commuter rail (LIRR or Metro North) to visit the city. Also on Long Island are a number of harbors where you can drop anchor at no charge.

Located across the Hudson, Liberty Harbor might be a bit farther from the city but offers the most amenities. The marina is located near the PATH train, which connects New Jersey and Manhattan, and the Hudson River Ferries depart from here to multiple stops in the city.

If you’re visiting to see a Mets game or the U.S. Open, you can’t get much closer than this. The city-run marina is next door to Citi Field, the USTA Tennis Center, and a short walk to the subway. LaGuardia Airport is also nearby and flight patterns will be overhead; just think of the lights as New York’s stars. The marina has 20 transient slips available.

This centrally located city-run marina, located on Manhattan’s Upper West Side, was founded in 1937. Steps away, the Boat Basin Café serves a delicious burger under the West Side Highway. The 79th St offers limited amenities – not even fuel – but is close to all of the attractions of the city including Central Park and the Museum of Natural History.

Located in the shadow of the new One World Trade Center, the North Cove Marina offers every amenity and proximity to all the subways — but at a cost. One of the more expensive marinas in the city offers slips for yachts up to 180 feet.

Chelsea Piers is a commercial dock renovated into an adult playground complete with a gym, driving range, and ice rink. The marina is managed by MarineMax and is just steps away from delicious snacks in the Chelsea Market and the Highline Park, an elevated railroad converted into a park.