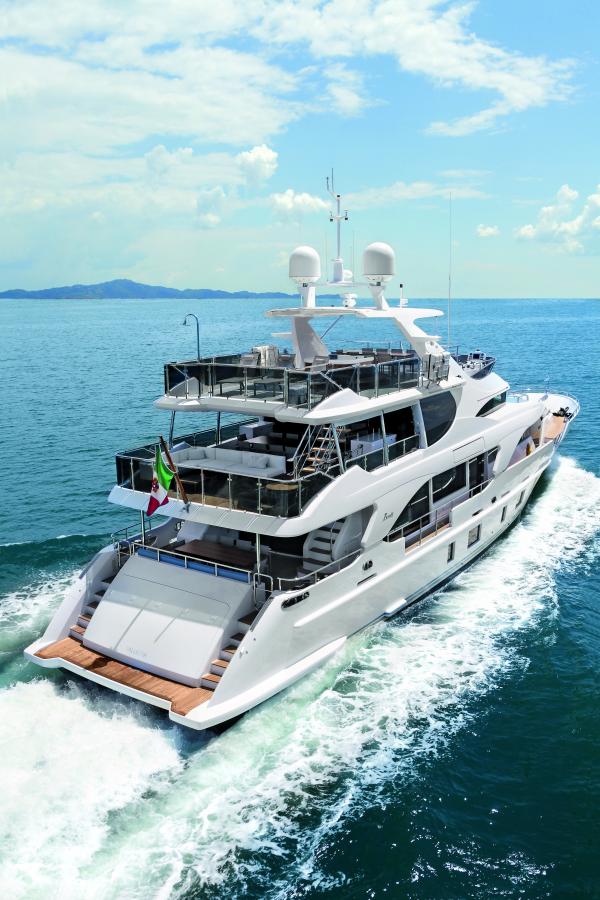 In Part I of this two-part series, we mentioned some must-see luxury motoryachts in our 70’ – 140’ range from our Top 10 Yachting Manufacturers’ List that you’ll find at this year’s Fort Lauderdale International Boat Show. The list ends with these last but not least stand-outs.

Benetti will float a Benetti 93 Delfino, a Traditional Supreme 108 and the Veloce 130. Termed by Benetti as “the jewel of the Class range”, the Delfino 93 series—boasting its seventh launch this November—retains key features of the line while adding unique elements, including custom interiors. This model is powered by twin MAN V8 1000 Turbo-Charged diesels for max speeds of 13.5 knots. Benetti’s Class Range Displacement line includes semi-custom composite luxury motoryachts from 93’ to 145’. Benetti’s banking that the tri-deck 108’ Tradition Supreme will enjoy the same popularity of the Tradition 105 series. She accommodates 10 guests and five crew. The Traditional Supreme 108 boasts hybrid diesel-electric propulsion. She’s powered by either traditional twin 735kW MAN V8 1000s or twin 35kW electric motors powered by gensets that connect to regulators/inverters in the main engines. The electric propulsion allows navigation up to six knots. With the traditional MANs alone, she’ll cruise at 12.5 knots and top out at 15 knots. At 10 knots, she’ll have about a 2,300-nautical-mile range. Her beam is just over 23.5’ and she draws about 6.5’. Benetti’s Veloce 140 of the Fast Displacement series will actually debut at the Fort Lauderdale show with her distinguished new D2P hull designed by Pierluigi Ausonio Naval Architecture Studio and the Azimut|Benetti Research and Development Center. In this vessel, Benetti has balanced high performance with comfortable displacement speeds (12-knot cruising and 20-knot max). In this build, Benetti has actually employed the largest engine ever mounted at the Tuscan shipyard: two MTU 12V 4000 M93L 3500 mhp engines.

Finally, China-based Cheoy Lee will display an Alpha 76 Flybridge, Alpha 76 Express and Bravo 84 Cockpit Motoryacht. The Alpha 76 Flybridge features an open-air helm station and upper deck that creates more living space. The thoughtful layout includes a galley that is up and aft for easy meal service, a lower helm to starboard for indoor dining to port and three large suites belowdecks. Like the Alpha 76 Flybridge, the Alpha 76 Express offers cutting edge design and innovative technology with top speed in excess of 37 knots thanks to twin MTU8V2000M93 engines (and ZF 500 pod drives). She features a comfortable ride, excellent stability, ease of operation and luxurious surroundings for her six adults plus crew. The design of Cheoy Lee’s 84 Bravo Cockpit Motoryacht was based on their proven and successful Bravo 78 motoryacht design by Mike Burvenich of M.G. Burvenich Yacht Design. She’s spacious, seaworthy, efficient and strong with a versatile cockpit. The main deck features both formal and informal dining areas serviced by a country-style galley. Three large staterooms, including a king-sized master and two full-beam queens (all ensuite) are housed belowdecks. She’s powered by twin Caterpillar C32 1700hp diesels.

See you at the show!