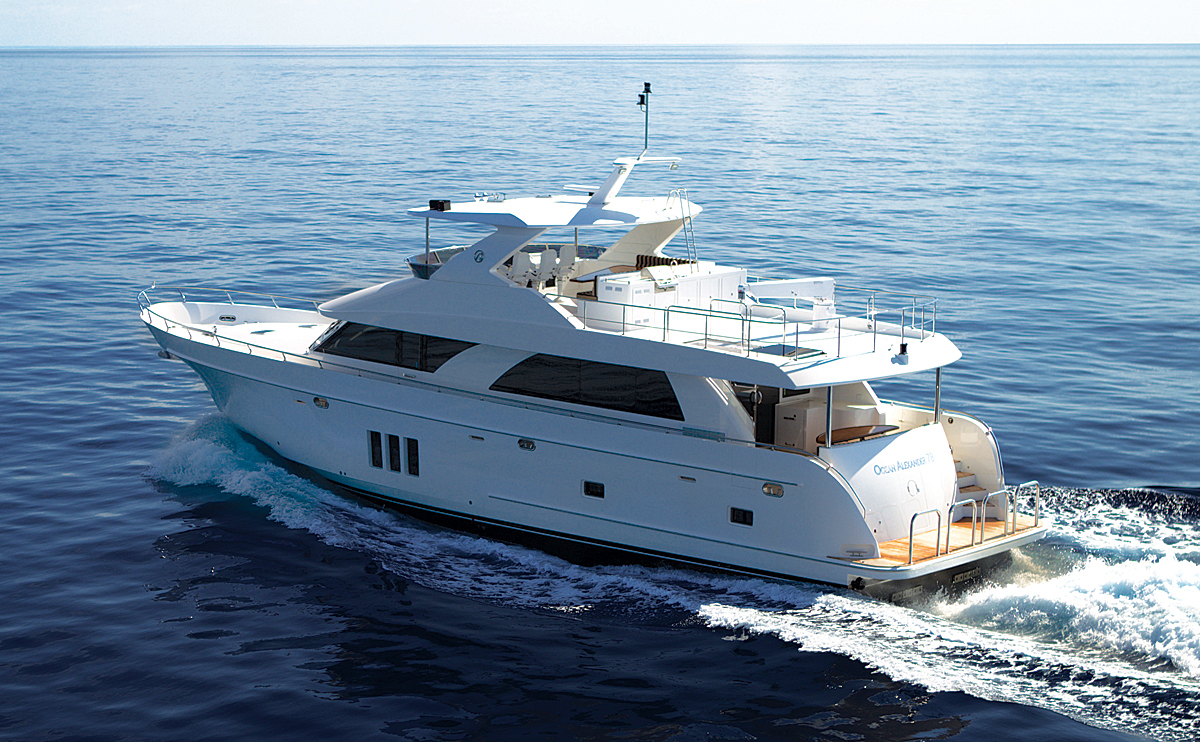 It’s no wonder that the updated Ocean Alexander 82 Cockpit Motoryacht is selling so well – it set a sea trial record last year reaching 28 knots with its twin MTU 1920HP engines. However, her optimum cruise speed is 18.5 knots @ 1800 RPM (for a range of 471 nautical miles) or 21.1 knots at 2000 RPM (for a range of 409 nautical miles). Innovative upgrades in the construction contributed to the record including weight-saving technologies like aluminum beams, advanced composite materials, specialty plywood, and aluminum honeycomb backing in certain spots—and minimizing drag overall.

Performance upgrades have provided a great foundation for the luxuries in the Ocean Alexander 82 Cockpit Motoryacht. Guests and owners will thrill at the extended cockpit for fishing gear or socializing, including an aft deck offering al fresco dining with a convenient bar.  Captains (or experienced owners) will appreciate dual helm stations, including a flybridge helm with 3 Stidd helm chairs, settee, and table arrangement for those sometimes lonesome days at sea. She’ll sleep up to 6 and a crew of 2 or 3.

The swift sales of the new 78 Motoryachts come as no surprise either. Ocean Alexander calls it “…a temple for sun worshippers, a swift, unshakable guardian in weather, and a quiet, opulent cruiser with an enormous wealth of standards.” Buyers will also appreciate the plethora of substantial no-charge options like certain appliances and gear. Stowage is not an issue either—golf clubs, snacks, clothing, provisions, wine, liquor, and more will easily fit into closets, drawers, hanging lockers, display tables, and cabinets throughout the vessel. Two configurations include a skylounge and country kitchen or open flybridge and lower helm. Exotic wood cabinetry and sparkling stainless in the engine room reflect Ocean Alexander’s exacting attention to detail. Her 20’ 1” beam accommodates 3 staterooms, in addition to crew quarters. Her draft ranges from 5’4” to 5’11”. Twin MTU 10V2000s (1600HP) come standard.

Unusual and special for this range with smaller enclosed pilothouses is a day head. And, the Ocean Alexander 78 Motoryacht skylounge includes two nicely sized opening ports aft of the settee allowing fresh air. In addition, two side doors allow access to the Portuguese bridge, allowing for ease of access.

Ocean Alexander manufactures in Taiwan, China, and in the US, guided by two generations of one family over the past 35 years. Ocean Alexander currently produces models ranging from 72 to 155 and is one of the top motoryacht brands that 26 North focuses upon. Why? We like their quality design and manufacturing. Their yachts feature exquisite interior architectures, along with fine materials to construct sleek, modern hulls.