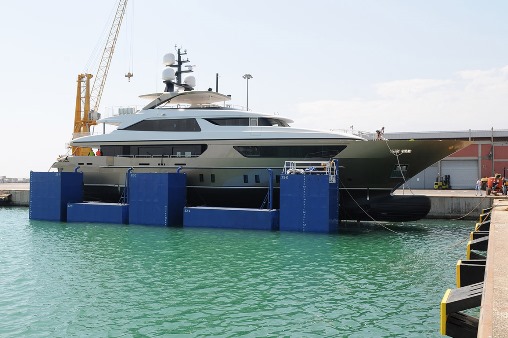 Coming into 2014 with a move from third to second position (overtaking Ferretti Group and its eight brands) in Showboats International’s most recent Global Order Book, Sanlorenzo continues to ride a wave of success thanks in part to its aggressive international business development. Here we take you through some of their big announcements.

In the first quarter, Sanlorenzo launched its first semi-displacement, composite, tri-deck SD112, christened O. She is reminiscent of a 1930s cruise-liner thanks to the classic air funnel on top. She’s positioned between the SD92 and the SD122, and six more SD112s have been sold. The SD112 accommodates a forward main-deck master in addition to four guest cabins. The spacious sundeck sports enough room for a large hot tub along with generous lounging and sunbathing area. Foldable terraces off the main salon allow her guests to cantilever over the sea. Sanlorenzo boasts a balance of design, volume and performance (from twin MTUs) in the fiberglass-hulled SD112. Shortly after the launch of O, Sanlorenzo announced AVENTUS, the second hull of the SD112.

Look for Sanlorenzo’s first SD126 on display at the Fort Lauderdale International Boat Show this fall. Designed by Francesco Paszkowski, the hard-topped SD126 has been constructed in the builder’s Viareggio, Italy, shipyard. Unique in the SD126 is a hot tub located on the bow in addition to one on the sundeck. Both the master salon and master suite boast terraces. The first unit will feature twin 1,622hp Caterpillar C32 Acert diesels that will max the SD126 out at 17 knots and cruise at about 11 knots.

The first quarter also saw the debut of the sleek SL118 H1, the new flagship in Sanlorenzo’s semi-displacement, planing range which actually is closer to 120’. Oversized large salon windows that slide up and down to open and close allow sea breezes to flow throughout the interior. The fly deck that looks over the stern features a glass bulwark with teak handrail. A generous beam of almost 25’ allows spacious layouts with no side decks (except for the bridge deck). Power is delivered by twin MTU 2000s (1,966kW @ 2450rpm) for top speeds of 28 knots and cruising at 24 knots, although an upgrade to the powerful 4000 series is available as an option. The full beam owner’s suite with study area has fold-down balconies with doors that open in two parts so that the upper window can open without lowering the bottom section. The SL118’s tender bay accommodates a RIB just over 21’ with room for jet ski and other toys. Glass, including double-glazed walls in the guest cabins on the lower deck, is used throughout the vessel for maximum light and views.

Earlier in the summer Sanlorenzo announced the launch of four megayachts in two weeks. Two of them were from the SL96 line (INDIA and PEACEMAKER), the SD112 AVENTUS mentioned previously and an SD92 NOOR. The owners of INDIA opted for an interior that incorporated exquisite woods such as a light-grey bleached oak for flooring and walls and Canaletto walnut for furniture. PEACEMAKER’s owners wanted a small gym in lieu of one of the guest cabins on the lower deck. The Italian owners of NOOR chose a minimalist, all-white interior design complete with white lacquered finishing for the furniture and ceilings, all complemented by white leather.

Finally, Sanlorenzo launched the sixth hull in the steel series (steel hull, aluminum infrastructure), megayacht 150’ TRIDENT which headed to a Hong Kong owner. She boasts a swim-against-current swimming pool and open-air cinema on the sundeck as well as wellness area and spa.