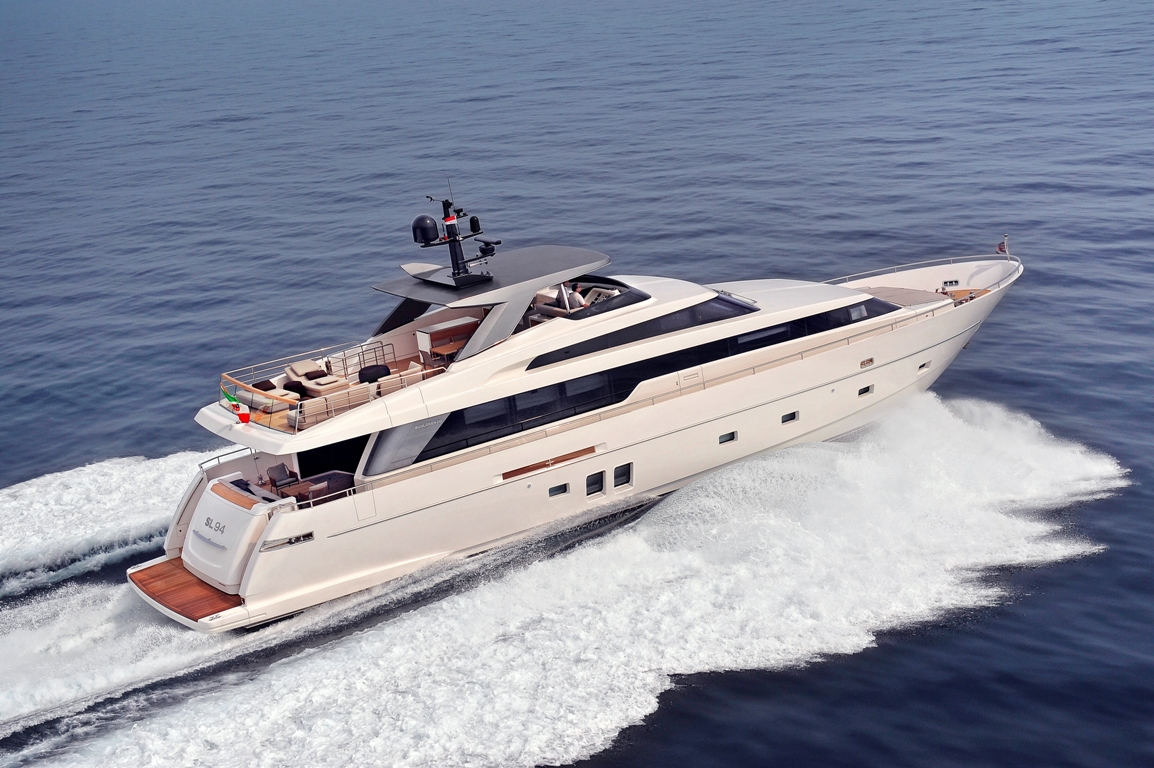 Sanlorenzo’s SL94 was designed by Francesco Paszkowski in collaboration with an in-house technical department.  Iconic design elements include rectangular portholes, oversized main deck windows and a distinctive radar mast that supports an optional hard top. Boat tests reveal excellent sound-deadening and vibration-reducing technologies to maximize comfort in this vessel. The Sanlorenzo SL94 is semi-custom so owners can choose various configurations of staterooms and main deck layout. A recent version was outfitted in twin 2,300-hp MTUs to top out at 27 knots. Her beam is 22’ and she draws 6’3”.

The semi-displacement SD110 (34 meters) fills the missing link in the range between the 27-meter SD 92 and 37-meter SD122. The second hull will deliver in 2014 from the Viareggio Shipyard. The motoryacht features fold-down balconies and twin MTU 12V2000s (1468hp) for top speeds of 17 knots. She packs five guest cabins and three crew cabins into her 110’ length and 25’ beam.

In addition to new contract signings. Sanlorenzo launched and delivered the SD92 motoryacht MINU to a German owner. This is the 20th launch of this model originally introduced in 2007. MINU’s owner will enjoy the vessel’s elegant lines that recall trans-Atlantic liners of the 30s, according to Sanlorenzo, who has integrated this look into their navetta-style motoryachts. MINU has been customized for her owner who chose bright oak wood for flooring and Calacatta marble with beige veins for the baths. The yacht is Italy all the way with design and products from Paolo Lenti and Knol for the outdoors and Minotti, Driade and Maxalato for indoors.

MINU’s four staterooms will accommodate up to eight guests comfortably, in addition to four crew. She’s powered by two MTU (V10 2000 M72) 1,224hps. With this configuration, she’ll top out at about 17 knots and cruise at 11 knots. Her ample fuel tanks yield a maximum range of 1,660 nautical miles at 11 knots.

Sanlorenzo has been aggressively pursuing the Asian market and was recently awarded the “Top Investors in China” at the China Awards by the Italy-China Foundation (Fondazione Italia–Cina). Sanlorenzo was noted as the Italian company that better valued the business opportunities of the emerging Chinese market. Sanlorenzo has been investing in the Chinese market by expanding its sales network, strengthening local business agreements and a direct presence in Hong Kong. Another Sanlorenzo showroom will open on Hainan Island, a key Chinese yachting destination. In September 2013, Sanlorenzo announced a joint venture with Chinese Sundiro Holding, producers of Honda motorbikes. The agreement will allow production of boats in China from 10 to 20 meters (about 33’ to 63’) and sales to China, Hong Kong, Macao and Taiwan of their yachts built in Italy from 22 to 62 meters (72’ to 203’). The Chinese market is expected to reach 100,000 yachts by 2020!

In addition to the expansion in the Far East, Sanlorenzo has also grown its sales force in Spain and in the UK, where they’ll clearly be going head-to-head in the UK with established brands Sunseeker and Princess. Sanlorenzo notes a trend in Britain toward larger yachts ,and their hull options and range will appeal to many—GRP 19m to 36.5m, aluminum in a 40m and 42m Explorer, and steel at 46m, 60m and 62m. They’re hoping potential owners will “see the quality behind the gloss.” Sanlorenzo had a CEO switch earlier in the year to former Ferretti CEO Fulvio Dodich who’s been pushing the global brand expansion.

Cantieri Navali Sanlorenzo Spa was established in Viareggio, Italy, in 1958, manufacturing all of its boats in wood until 1985 when they began building with fiberglass. In 1999, the company added an environmentally friendly shipyard on the Migra River in Ameglia (La Spezia) that today concentrates on 62- to 118-foot fiberglass megayachts.  In 2005, they built a new production facility in Viareggio that now builds Navettas with semi-displacement hulls (SD range) from 92 to 122 feet and superyachts in metal (aluminum and steel) from 125 feet to 164 feet and over.  Two years later, Viareggio launched its first models—the SD 92, first semi-displacement in fiberglass, and the 40 Alloy first metal motoryacht. 26 North Yachts will continue to closely monitor this brand’s continued expansion and growth in the 70’ to 140’ range that we specialize in.